NEW BOOK! - You can judge a book by its cover

NEW BOOK!
You can judge a book by its cover 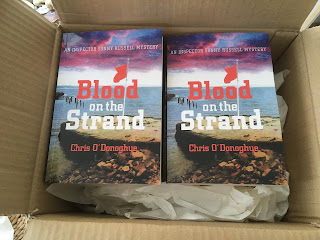 There's very little more exciting for a writer, than holding the first printed copy of a new book. You've spent getting on for a year, sitting at the keyboard, shaping and crafting prose into a form that you hope will engage readers for 300 hundred pages or so. Then you go over the first draft, chopping out chunks, adding new bits and generally honing it. Next, you give it to an editor, and hope they won't want to change it too much. (I'm lucky as my better half was a sub-editor on The Daily Telegraph for 25 years.) We discuss changes and improvements, which I might or might not agree with. After all it is my book. Then you pass it on to a Beta Reader, a trusted friend who will be honest and also find mistakes that we've missed.
A friend, another journalist, pointed out, when you write 80,000+ words, you wouldn't be human if you missed some errors. (He also said: What I thought was amazin’ was the punctuation of conversation. Never seen so many apostrophes, and all spot on.)
Next, it goes to the printer, who sets it out then sends you a draft copy which you go over yet again, making a note of changes which need to be made before the final print run. 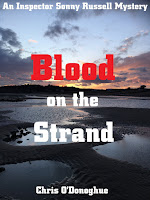 Once the words are sorted out, getting the cover right is the next task, and probably the most important for sales in bookshops and online. As a designer, I like to try out ideas for the cover, as shown above. I thought mine were quite good but, I realise my limitations, I am not a book cover designer. Luckily, I have a neighbour, with many years experience in graphics, working on magazines. Plus, he is an avid reader and I trust his judgement. He has been happy to produce the covers for all three of my books. And when he showed me the cover he'd come up with for BLOOD ON THE STRAND I couldn't have been happier. Although he had only read the synopsis his image captured the atmosphere of the book perfectly. 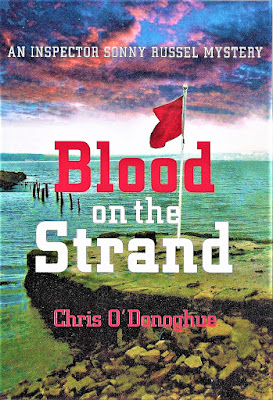 So, the book is written and edited, the cover is designed and finally it's printed. But does it stop there? No, of course it doesn't. Now comes the hard graft of publicity and promotion: social media, forums, public appearances, talks, book launches etc etc. You have to be proactive and engage in as many different ways to get readers to buy your baby - there's a mountain of competition out there. Hence, this blogpost which may, or may not result in a sale or two. So over to you, dear reader. 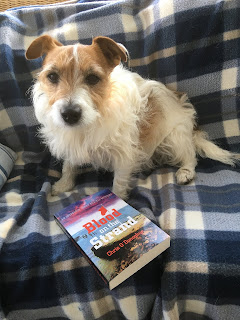 MEXICAN FLEABANE AND VALERIAN - What's in a name? 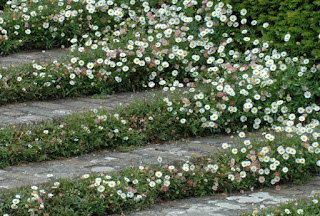 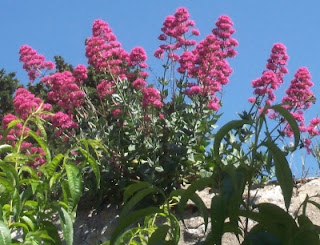 It was getting dark; Russell had switched on the standard lamp and was settling down with his book again. Cortot’s rendition of the Chopin preludes was playing softly on the radiogram. He heard a car draw up outside his home; the engine was switched off. He rose from his chair, turned on the outside light and opened the door. Lewis was making his way down the stepping-stone path between the clumps of newly emerging Centranthus and Erigeron.

extract from the soon to be released, Blood on the Strand 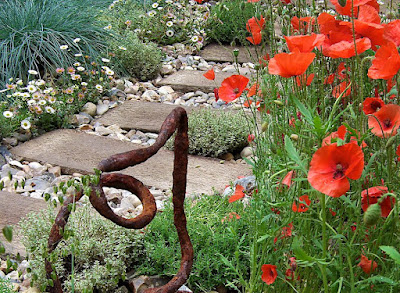 Mexican fleabane, Latin American fleabane, Santa Barbara daisy, Spanish daisy, Karwinsky’s fleabane, or bony-tip fleabane. These are all common names for Erigeron karvinskianus. It grows freely in paths and on steps and I used it in my medal winning Chelsea Flower Show garden, Shinglesea. I was very amused when the BBC presenter, Joe Swift, asked me what it was called. When I told him, he asked for the common name as he couldn't pronounce the Latin when on camera! Red valerian, spur valerian, kiss-me-quick, fox's brush, Devil's Beard and Jupiter's beard are common names for Centranthus ruber. It grows wild, near the coast and is usually red although it can vary from white, through pink to deep red. I used three colours in my Chelsea garden and I let it self-seed freely around my house not far from the sea. 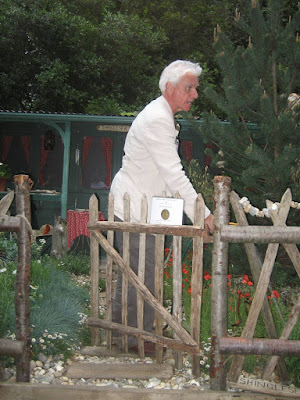 Posted by capabilitychris at 03:54 No comments:

This post is by way of a teaser. As the third in the series of DI Sonny Russell crime novels, BLOOD ON THE STRAND, is soon to be published, I thought I'd share a couple of paragraphs from the story. Much of the action takes place around the iconic net huts, or shops, at the Rock-a-Nore fishermen's beach in Hastings. The first photo show the huts as they are now, the second, my interpretation on my layout in a winebox, Castle Quay. If you're interested, details of the the first two books in the series are on the right.

The two men were standing outside Crabbe’s net shop, at the far end of the beach from their own. Similar structures stood all around, their distinctive shapes like blackened fingers, pointing towards the night sky. It wasn’t long before the crunch of boots on shingle announced Crabbe’s arrival. He produced a large key and put it in the rusty padlock.

Sailor Tedham and Frankie Drake were sitting outside their net shop. Drake, perched on a barrel, was splicing a rope while Tedham was perched on an upturned dinghy, smoking his pipe and looking vaguely into the distance. Drake worked deftly, using a fid to push the unwoven strands into the rope, quickly fashioning an eye in the end. When he had finished he put the fid to one side, took a length of waxed twine and quickly parcelled the splice, finishing by cutting the loose ends with his knife. As he picked up another rope to start a new splice, a black Wolseley drew up beyond the further net shop, about a hundred yards away. 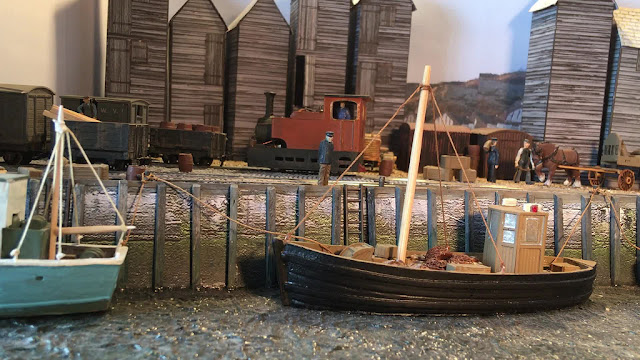 Posted by capabilitychris at 04:52 No comments:

BLOOD ON THE STRAND 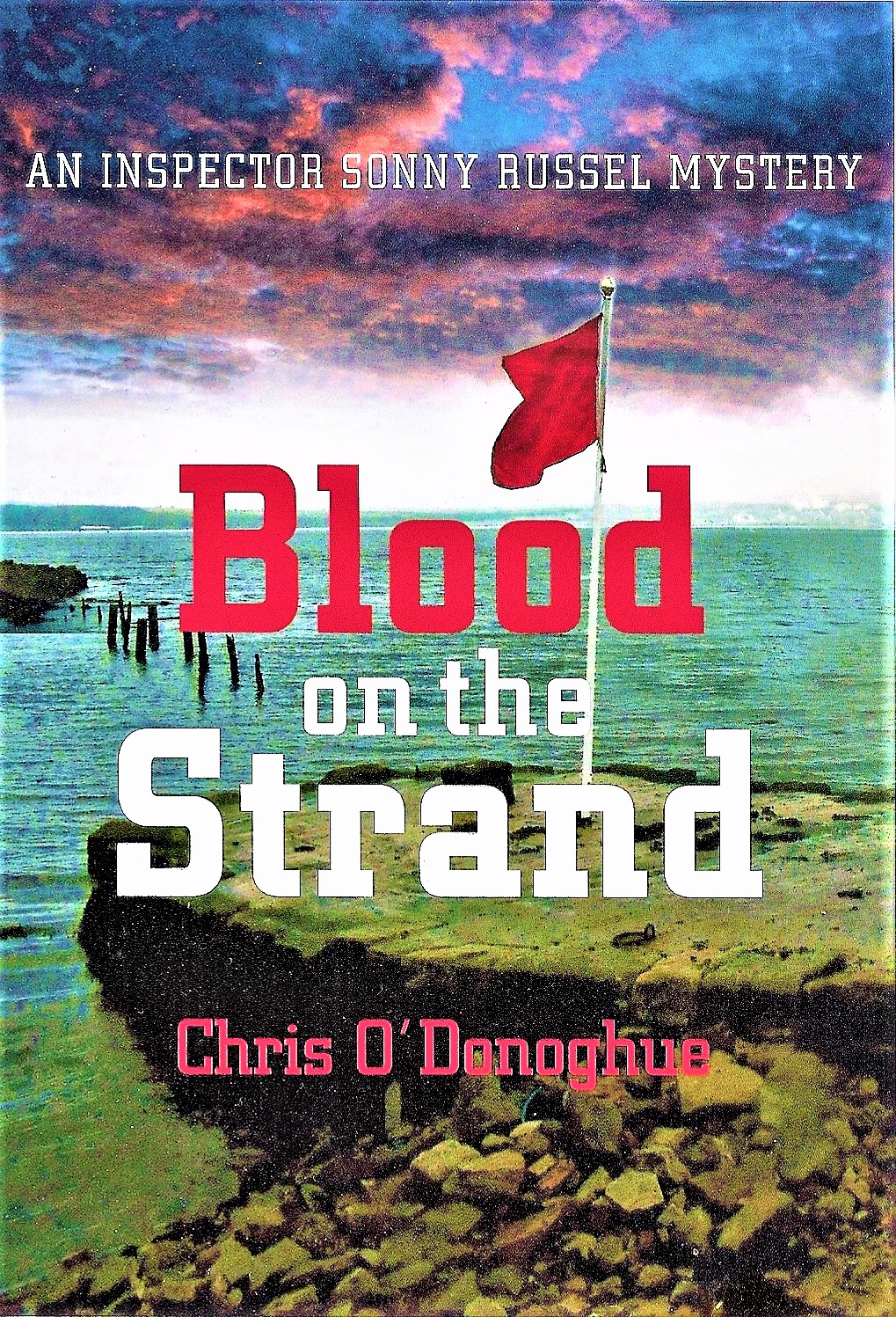 BLOOD ON THE STRAND is a story of intrigue and drama, set on the sleepy south coast in the post-war mid-fifties.In a raging gale a heavy crate is washed up on the beach near Compass Point. DI Sonny Russell and his sidekick DS Johnny Weeks happen upon it while braving the weather near Sonny’s home. Puzzled, they go to get help to recover it, but when they return it has gone. So begins a thrilling and dangerous search for stolen Nazi plunder. It leads the detectives, ably assisted by an eager young policewoman, Nettie Sharpe, on a twisting trail that encompasses Hastings fisherman, their iconic net huts, ruthless foreign criminals and the shady side of antique dealing.

Blood on the Shrine 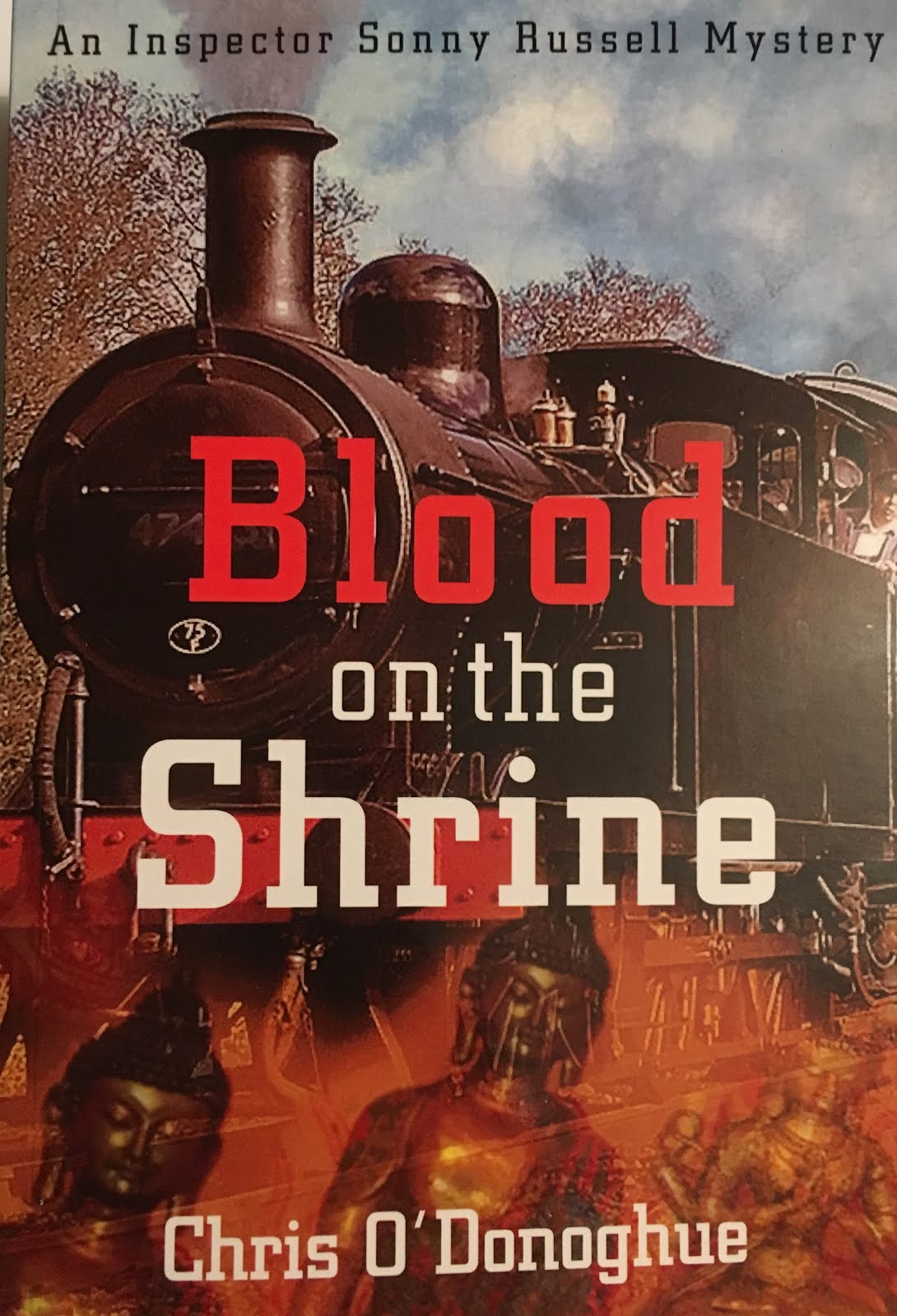 Blood on the Shrine is a story of meditation & friendship, deception & intrigue. Beginning in a snow-bound Buddhist retreat in the 50s, it progresses to a train robbery & tests DI Sonny Russell to his limits. Available on Amazon as Kindle and paperback

BLOOD ON THE TIDE 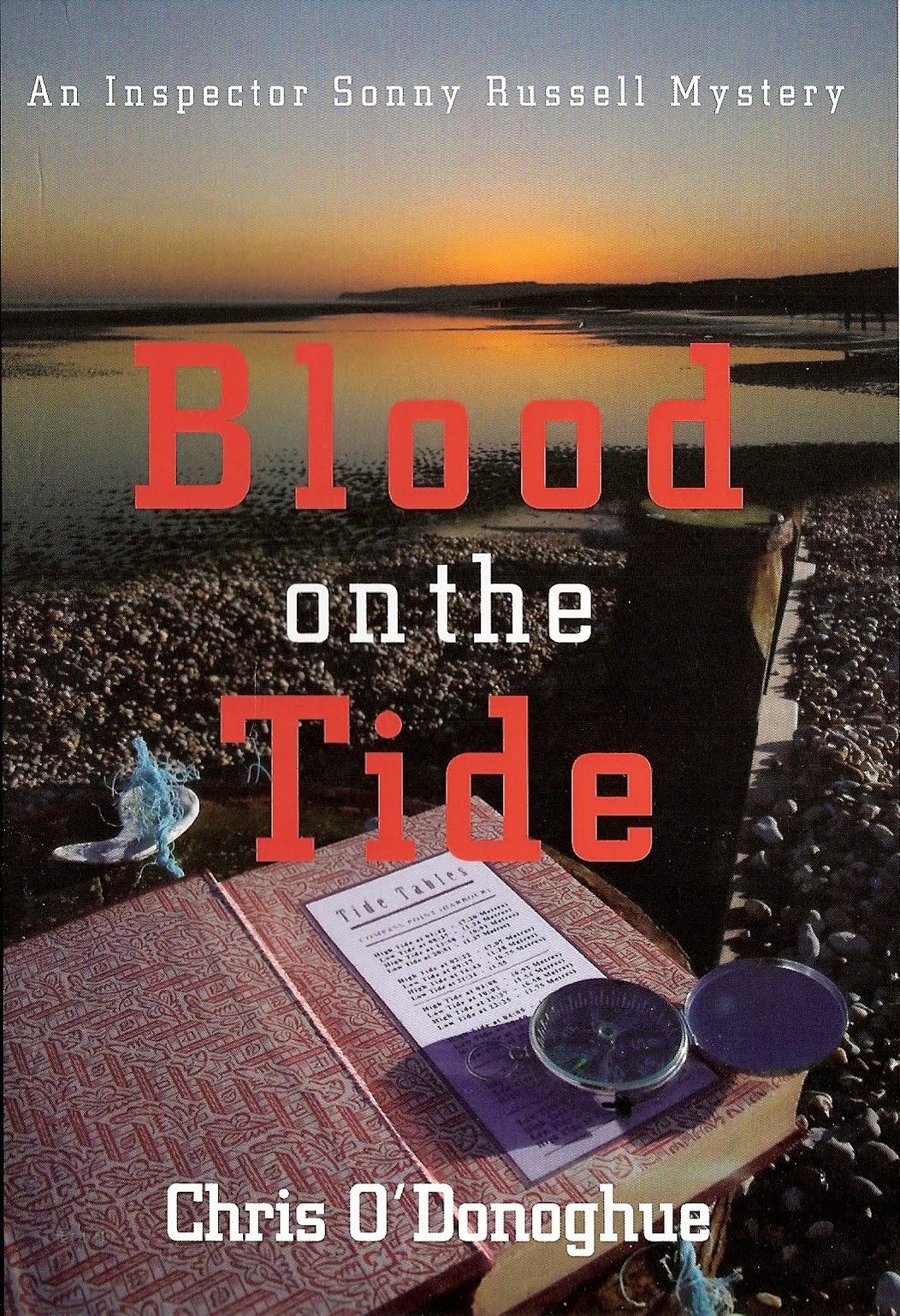 capabilitychris
Although I studied Industrial Ceramics and worked as potter, mouldmaker and modelmaker I have always written and have had articles published on various subjects in magazines and newspapers. I now work as a Garden Designer, speaker and author of period detective novels.